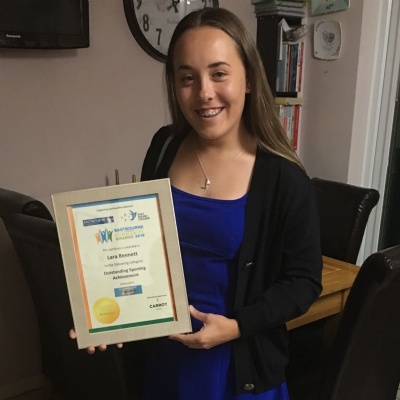 Lara Bennett, a year 10 pupil has won the award for Outstanding Sporting Achievement at the Eastbourne & District Community Awards.

Lara began weightlifting a few months ago and after just four training sessions competed in her first contest and set new records.

The two under 18 competitions she has taken part in so far are the International All Round Weightlifting Association British Grip Championship, where she received the award for the best junior lifter, and the Postal League Competition, where she achieved two British records and five junior world records.

Headteacher, Solomon Berhane, said: “We’re delighted to hear of Lara’s achievements and she obviously has a natural flair as she’s broken records so early in her weightlifting career.

“We’ll be keeping a close eye on her progress in future competitions and wish her continued success.”