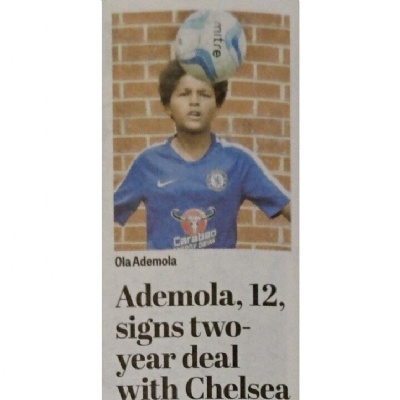 The Eastbourne Herald featured an article about Ola Ademola in todays newspaper (24/05/19).

"A talented young football star from St Catherine's College has been selected to play for Cheslea's Under-13 football squad. Twelve-year-old Ola Ademola, who lives at The South Harbour, has been given a two year contract with Chelsea for the next two seasons.

It's a busy schedule for Ola as he trains at Chelsea Football Academy in Cobham three times a week for two hour sessions, plus match days on Sundays.

Ola started playing football aged four, after watching his older brother at his football training sessions. He would study what he was doing and practice the moves. He went on to play a season with Eastbourne Borough before moving to All Stars Soccer Academy and playing with the Arsenal development squad, eventually moving through to Arsenal Football Club Youth Academy.

When the distance from home to Arsenal's training ground became too much, Ola left and played locally until he was old enough to sign for Chelsea. He was spotted by talent scouts during a tournament with All Stars and had been known to Chealsea from around the age of 7 years old.

Ola is now part of Chelsea's Under 12 squad after he was signed as an academy player last July. During the year he has already has opportunities to play in international tournaments with his age group, as well as playing up with the under 13 group, and he was the part of the team that won the Cobham Cup 2019.

He also played in the Paris Saint-Germain Tournament earlier this month (May). Chelsea had beaten Aletico Madrid at the group stages but lost out to them in the final. Ola's team also won the Fair Play Award during the tournament."